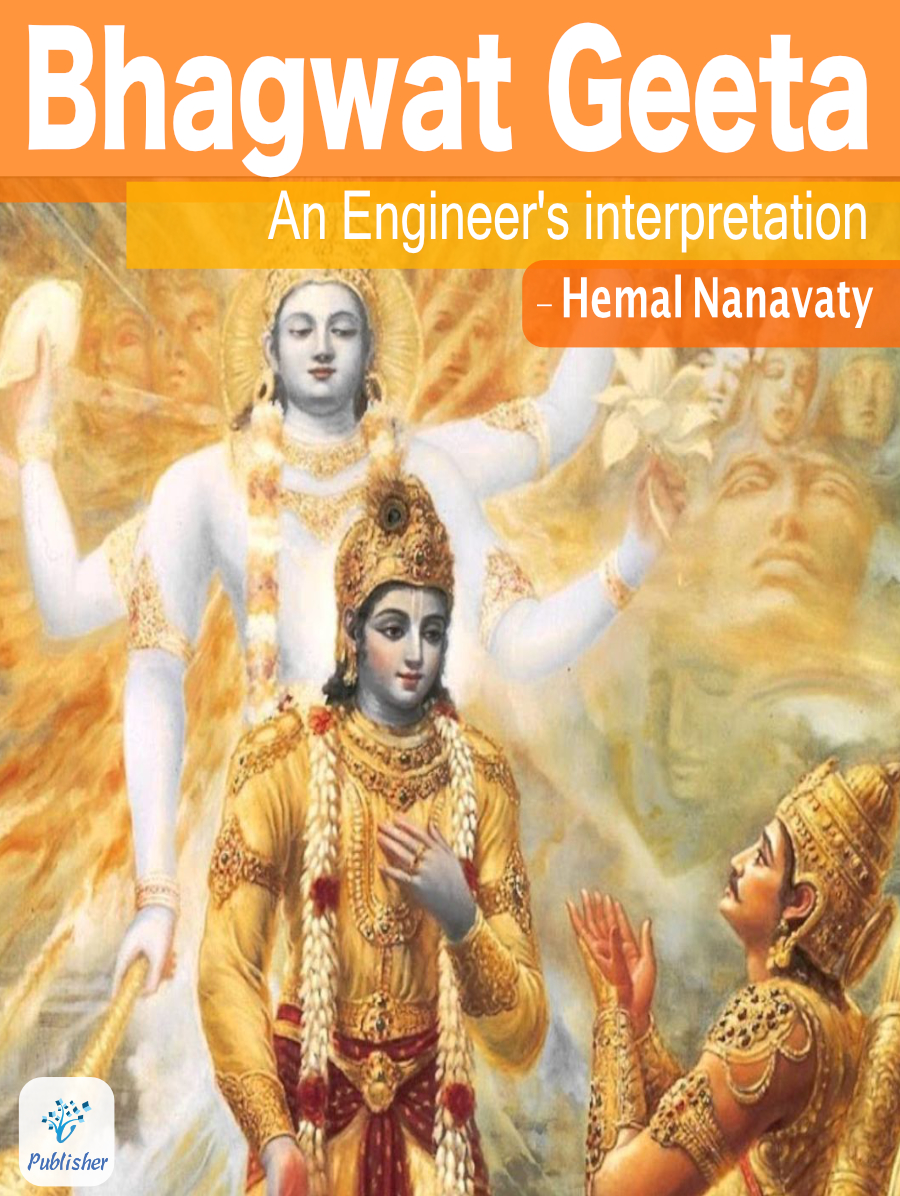 This Book is an innovative attempt to convey the central theme of Geetaji in simplified way, from a totally new angle. It is a venture to create a clear understanding of highly misunderstood philosophical masterpiece. One who realizes the central theme of Geetaji shall hopefully embrace it, and consequently find his life simpler and more peaceful. I hope my humble effort shall receive appreciation from readers.

Warning: sizeof(): Parameter must be an array or an object that implements Countable in /home/customer/www/bookmonks.com/public_html/wp-content/themes/trendz/woocommerce/single-product/meta.php on line 17

India has inherited numerous ancient scriptures, and holy books from her saints. The Bhagwat Geeta is one scripture who stands apart from all others for a very special reason. The reason for Bhagwat Geeta standing apart from other scriptures is, the suffix “ji” added to its name. This suffix is added to any elderly person’s name to honor his elderliness, or to give him additional respect. Despite Bhagwat Geeta being a book, we call it “Geetaji”, as if we are addressing an elderly person with honor. This reason for such a special treatment to Geetaji is being explained in upcoming chapters.

Geetaji, is such a philosophical masterpiece, that even the divine deities cannot gauge its depth. So, there is no question for any normal person to stand a chance. But still, for propagating the message of Geetaji to normal people, many scholars have published lots of literature on Geetaji. People have written and spoken a lot about Geetaji. Not only this, there are lots of scholars who have lectured on each and every word of Geetaji. But the bitter fact is that even after all this, Geetaji has not been able to be as beloved amongst the masses as much it deserves. People have not embraced Geetaji as whole heartedly as they should. What could be the reason behind this sad reality? I assume, it is the philosophical nature of the messages from Geetaji. Had the messages from Geetaji presented in the form of some stories, people would have embraced them whole heartedly.

Anyways, the main question is this. When mountains of literature on Geetaji are already available with us, what is the need for a normal person like me to write something more on same subject? Replying to this obvious question, I will only say that the question is legitimate, but this book has different kind of features. The first major feature of this book is that before writing this book, I have actually practiced Geetaji in my real life. For prolonged period, I have followed the sound of my soul as advised by Geetaji. The decisions which I have been taking for myself look weird as per worldly wisdom, but are correct as per the sound of my soul. In other words, this book is the result of my own experiences after embracing the thought process which is “Geetaji compliant”. Each and every matter written in this book is extensively practiced on self, before preaching to others.

The second major feature of this book lies in its style of presentation. This book neither provides verse-by-verse explanation, nor chapter-by-chapter explanation of Geetaji. It tries to bring out just the overall central theme of Geetaji. It simply explains the major subjects which original Geetaji has touched upon, in an extremely simplified language. All the high level detailing which may confuse a beginner, are kept away from this book.

The third and last feature of this book relates with my profession. I am an Engineer by profession. Those who are professional engineers do not get satisfied upon just seeing that something is functioning well. They tend to investigate and find out the technicalities involved behind it. While reading Geetaji also, this professional habit played its role. Instead of simply accepting whatever is told, I tried to find out how things are working in divine and physical worlds. I tried to imagine that how the destiny written in divine gets translated into physical events of our lives. Whatever I found out with this unique point of view, is being presented in this book.

In short, this is an innovative attempt to convey the central theme of Geetaji in simplified way, from a totally new angle. It is a venture to create a clear understanding of highly misunderstood philosophical masterpiece. One who realizes the central theme of Geetaji shall hopefully embrace it, and consequently find his life simpler and more peaceful. I hope my humble effort shall receive appreciation from readers.

Be the first to review “Bhagwat Geeta” Cancel reply